Today celebrates my 6th year of my Insanely Normal blog.

It’s been fun, although a little slack, and I know that I have said it time and time again, but that can now change…  I have a lot more time to be able to publish, and I have all sorts of ideas!

So, without further ado, let’s revisit my top three posts…

This post has somewhat amused me since I published it in 2014.  It was a review (a negative one at that!  And badly wrote, haha) about a local franchised café.  I can remember visiting the place – it was bloody awful, and I imagine nothing has changed, because I’m still receiving messages agreeing with my post!  You can read about the Pound Café in Huyton here.

2015 seems to have been the year that brought in most of my subscribers (hello stalkers!), and top of the shot (again), was my Christmas Ham post!  My second most popular post in 2015 was for my slow cooker sausage casserole…  With just under 10,000 reads throughout the year, it definitely got the attention it deserved, ha ha.  You can try the slow cooker sausage casserole recipe here.

Drum roll please, because at number 1…

Every Christmas, I make a ham.  It’s by far the best thing I have ever made, and you all seem to agree, as the amount of views that post has received is amazing!  I first published the post in 2012, and it seems to be a recipe that is used right throughout the year, as it’s always my most read…  My “best” stats for this recipe was on 1 December, 2016, when I had a little over 4,000 views – just on that day!  You can read my Christmas Ham here.

So, it seems that my stalkers like recipes and negative reviews!  Ha ha.  Yes, those were my top three posts in the past six years, and other posts in my top ten include more recipes, a holiday post, and how parenthood drives me crazy.

So, here’s to more exciting times – more recipes, more random stuff, and I may even through in a mini-comp somewhere…

Today he starts the Reception class.

He’s been in the nursery in the school for the past fifteen months or so, but this is different.  It means he’s growing up, and I don’t know if I’m quite ready for it yet.  He’s still my baby.  Yes, I have Donut, who is my baby (age 1), but Gning…  He’s my miracle baby, and he always will be.

Here’s a poem I found online…

I know you’re rather busy
First day back, there’s just no time
A whole new class of little ones
And this one here is mine

Do you help them eat their lunch?
Are you quick to soothe their fears?
And if he falls and hurts his knee
Will someone dry his tears?

And what if no-one plays with him?
What if someone’s mean?
What if two kids have a fight
And he’s caught in between?

You’re right, I have to leave now
It’s time for him to go
I’m sure he’ll learn so much from you
Things that I don’t know

Yes, I’m sure they settle quickly
That he’s fine now without me
I know he has to go to school
It’s just so fast, you see

It seems like just a blink ago
I first held him in my arms
It’s been my job to love, to teach
To keep him safe from harm

So, when I wave goodbye in a moment
And he turns to walk inside
Forgive me if I crumple
Into tears of loss and pride

I know as I give him one more kiss
And watch him walk away
That he’ll never again be wholly mine
As he was before today.

From a scared parent… 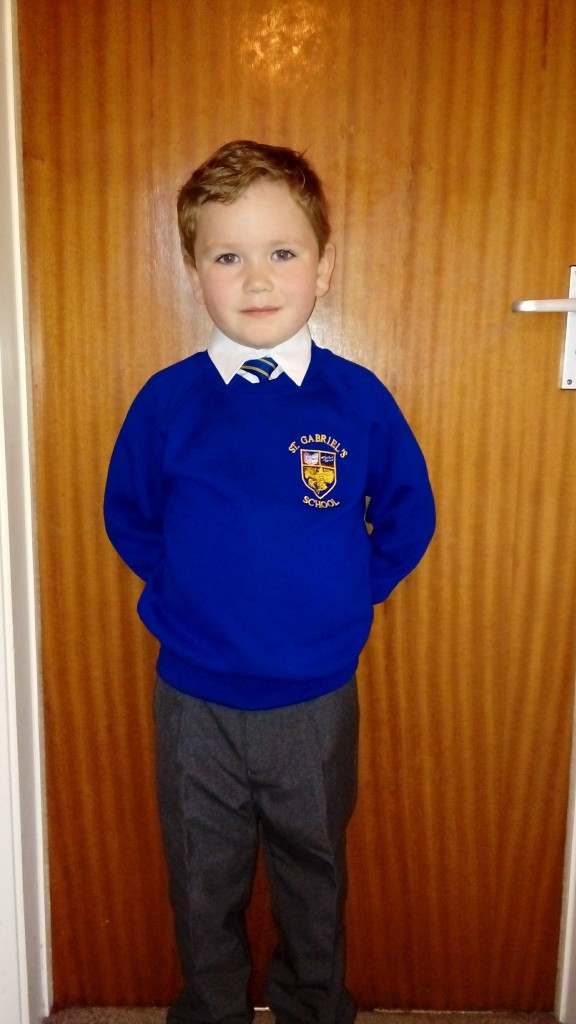 And here’s the reply I found…

I understand that you are scared
to wave your child goodbye
and leave him in a teacher’s hands
don’t worry if you cry!

I’m used to weeping parents
It’s hard to leave I know.
But it’s time to share him (just a bit)
To help him learn and grow.

Let me reassure you
That I’ll give your child my best
I’ll wipe his tears, soothe his fears
And change his dirty vest!

If your darling child is full of cold
I’ll blow their nose all day
Just like you, I’ll care for them
In a special way.

I’ll treat him like I would my own
I’ll catch him from a fall and
If there is ANY problem
I’ll be sure to tell you all.

It’s true he’ll grow to love us
They’ll talk of school a lot
It doesn’t mean they hate you
And that you should lose the plot!

I’ll tell you a secret..
That when your child is here
They talk to me as much of you
Of this please have no fear.

You’ll always be their mother
Whilst teachers come and go
To them you are their number one
This I truly know.

Soon you’ll see some changes
In your little girl or boy
They’ll become more independent
And to see this, it’s a joy!

I’ll teach them all I have to give
To share, climb and to write
But to you they safely will return
To tuck them in at night.

With love from a teacher…

Today is my sons’ 2nd birthday.  I have to admit…  I’m feeling rather emotional at the moment, trying to hold back the tears…

I don’t know why I’m feeling upset, but all I want to do is cry.  I think it’s the anti-climax to what should have been an amazing day for my little man.  As my husband has just pointed out, it’s probably all the build up to his birthday.  I got over excited myself, and to William, it’s just another day.  He may be able to say ‘birthday’ and ‘party’, but he doesn’t yet understand that today is a special day.  It was just a day where he was spoiled with wrapped up ‘pressies’ (as he calls them), and that he went out for dinner with his mmymmy, daddy, nanny and grandad…

The anti-climax?  Well.  William has decided to be in a bit of a ‘meh’ mood all day.  He’s over-tired.  He decided to start crying in Asda…  Then the screams come.  Then he decided to cry when we were out at dinner…

I don’t suppose that it helped me either, when the party next to us consisted of about eight-or-so (what I thought was) 16 year olds, and one of their ‘nan and grandads’.  The kids were all drunken, being loud, very disrespectful, and openly (and very loudly), swearing and talking about each others private parts.  The grandparents just sat there and said nothing.

Anyway.  It’s your party on Saturday, William.  You will be surrounded by family and friends who love you, and there will be no idiotic strangers anywhere near you.

Happy birthday, my beautiful little man.  You’re no longer a baby…  But you’ll always be my squish-faced, baby boy, no matter how old you are. 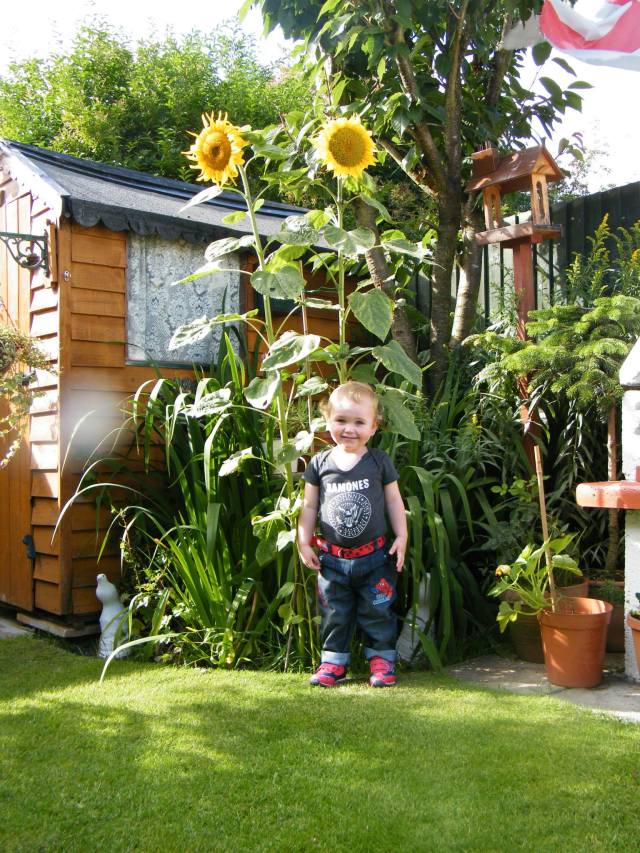 Today is the day that I made the teacup candles for.  Today is my parents 40th Wedding Anniversary.  Their Ruby wedding. 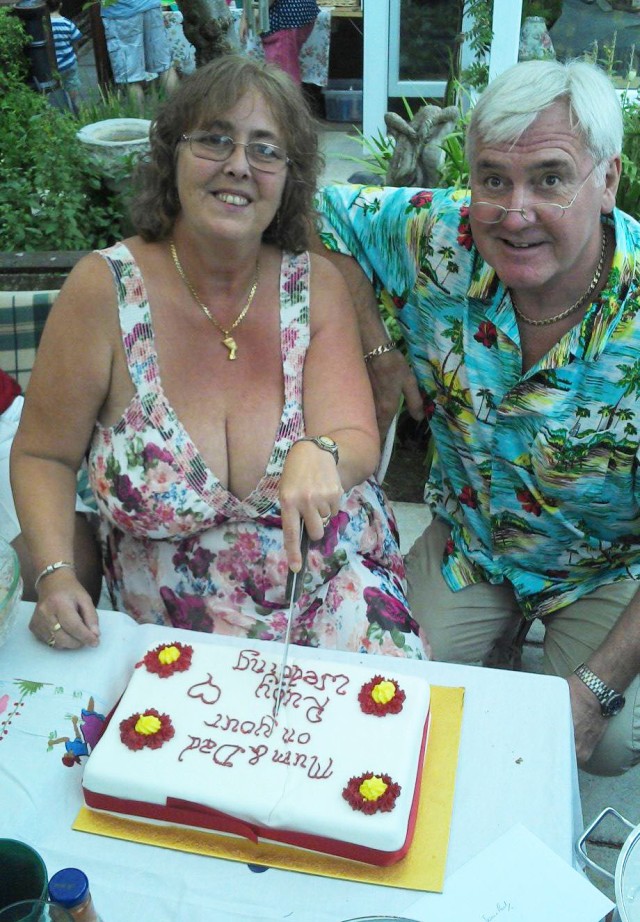 It all started on Saturday evening when my little man took a poorly turn.  Since then, the three of us have not been the same.  We thought it was a one off…  Baby vomited, and we assumed it was because he had overeaten.  Then New Years Eve came…

My son absolutely adores his grandad (my dad).  He literally idolises him – I think it works both ways ha ha.  My little man will follow him all around the house, want cuddles from him, run straight past his nanna to get to him…  But on New Years Eve it was very different.

My husband unbuckled him from his car seat.  I went on ahead to make sure the front door was unlocked to my parents house, as it was raining.  The little man started walking up the driveway with my husband, but when he saw his grandad, he went really shy.  He hid behind my hubby’s legs.  He stopped in the doorway and pulled his face…  SO out of character.  It must have taken him about an hour and a half to ‘warm-up’ to his grandad.  Hmmm…  Something’s not right there.

Then came 9:30pm (approx).  This was my sons’ supper time.  He ate a bowl of his favourite cereal…  Then he brought it all back up again. Immediately.  Plus a lot more than what he had eaten.  I honestly thought my little man had turned into the little girl from the Exorcist.  Then came the fever – Sweating ‘buckets’ when the temperature was “just right”…  The cries, sobs, restlessness soon followed.

Regardless to say, that night none of us slept.

New Years Day came – Baby now has a chesty cough.  Sounds like he’s got a lot of phlegm on it.  The problem is, a baby can’t spit.

New Years Day night – None of us slept again.

I was in work on 2nd January (yesterday).  Well, guess who wasn’t well then?  I had the cough.  My throat was so sore from all the ‘barking’ that I could taste blood.

However, last night we all managed to get a ‘fairly decent’ amount of sleep.  When I say that, I actually mean we all had 5-6 hours in total.  Better than the previous couple of nights.

Today I took a turn for the worse.  I was up and dressed, ready to go to work, when I had to run to the bathroom…  I’ll leave it there.  But the point to that is, I’m home.  I’ve had to call in ill.

Oh, I didn’t mention – Husband is also ill with it.  His came on throughout the afternoon of yesterday.  So all three of us are literally ‘bleurgh’.

I’ve just found out my dad’s now in bed with it.  He must have it really badly, as nothing normally knocks him off his feet.

But on a lighter note, my little man seems a lot better in himself.  He’s still not well – Still has the cough – Still a little chesty – But overall, he’s playing.  So I suppose that’s a good thing.

Apparently, this rotavirus is on its’ way throughout the whole of the northwest of England.  If you’ve not already had it, try to stay away from people who have got it.  It is contagious.  If you are currently suffering with it, I’m so sorry.  I feel for you.  I really do.  If you’ve already had it, and are now back to normal, how long did it take?!  I’m starting to get a little fed up with the constant coughing now…