Yep.  It most certainly is.

I awoke later than I had planned today…  I actually forgot to switch my alarm on.  It needs to be set of a Wednesday, Thursday and a Friday, so I can be up in time to make sure everything is ready for me to take my little man to school (nursery).  My alarm is usually set for 6:45am; and I constantly knock the “sleep” button for about an hour.  This morning, I woke up (after a rather bad nights’ sleep) at 8:30am.  Normally, this is the time that I am leaving the house…

Oh well.  Gning obviously needed his sleep, as this is the second night on the run that he has had trouble in sleeping.  Tossing and turning all night; snoring rather heavily…  Because he had such an uncomfortable night, so did I.  I do worry about him constantly.  So this morning, I left him to his own devices.

A little after 9am, he stumbled in to the front room with the usual whinges.

By 9:30am, he was bouncing along the pavement, and went in to the school with no problems what-so-ever.

I think it’s hitting me, everyone…  I think the Christmas spirit is starting to show…

For those who follow Insanely Normal, I am sure that you have noticed that this blog does not really have a theme.  It’s not all about cooking; or about how to raise your kids; or giving hints and tips about how to lose weight…  It’s not about gaming, or movies, or music…  It’s literally full of random nonsense.  But hey!  That’s what makes a blog interesting…  Right?

This post is not diverting away from the nonsense theme.  For example, how many other people have made a posting about a Fraggle? 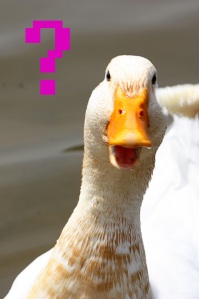 No, no…  That’s not a Fraggle.  That’s a duck *shakes head in disgrace*

Now, this is a Fraggle: 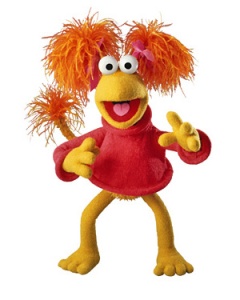 I actually hated it at the time.  It wasn’t because of the puppets.  It was because I used to wear my hair in bunches, like Red, and all the kids in school used to call me a Fraggle.  They weren’t being nice either…  It was during a period that I was bullied, but that’s an entirely different post all together.

Here’s a video of the introduction to the show that I found on YouTube.  Speakers on!  It’s rather catchy…

Want to sing along?  Here’s the lyrics:

So, late last night…  As in, super late last night…  I think it was at 2.30am, I decided to play a little game.  “Replace a word in a movie title with a Fraggle”.  Mixing Fraggles with a late night, and lack of sleep, was not a good idea, and I was laughing until well after 3am.  Here are a few that we got (the titles that were a little less obvious to work out, I have put in brackets () at the end of my revised title):

Harry Potter and the Chamber of Fraggles

Indiana Jones and the Fraggles Skull

Lord of the Rings: The Fellowship of the Fraggles

When the giddiness had truly crept in, we started quoting some of the more famous lines from films, hence the title of this post:

Now, imagine this particular puppet, who was actually an enemy of the Fraggles, saying, “You’re a Fraggle, Harry…” 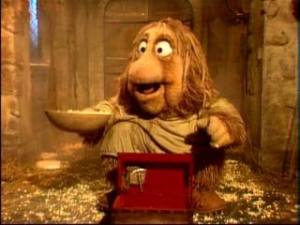 Come on.  You have to admit that he does (sort of) have a resemblance to Hagrid.  Oh!  Maybe this is who Hagrid was modeled on..?

I think the conclusion of this post should run something along these lines:

I really need to go to bed earlier.